‘Skin in the Game’ Reform: A Game Changer in the MF and Wealth Management World to Save the Retail Investor 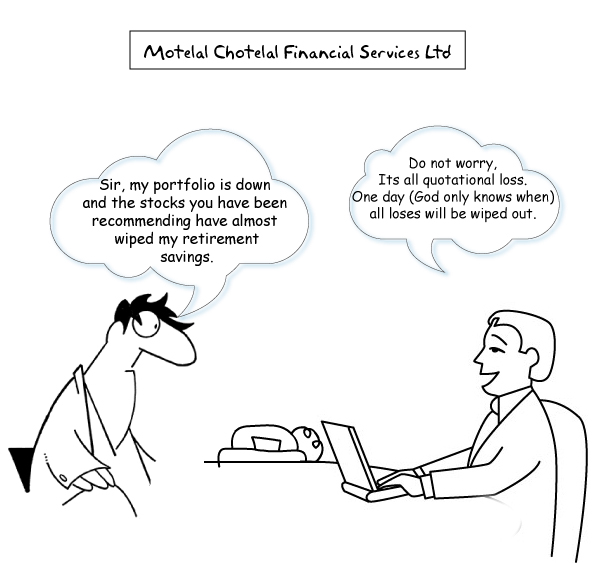 Indian benchmark indices are at a lifetime high and hundreds of stocks that have been the market darlings are at their yearly and some 2-yearly lows. This fall has been precipitated in a matter of last -mere 5 months.
Obviously most of the fund managers (mutual funds, private wealth, PMS schemes) are finding corners to hide where they can find respite and concoct some solid theories and reasons for wealth destruction last seen only in 2008-2009 – after all these were the very same guys on CNBC, just very recently, who were chuffed at their stellar performance and recommending shares ala Vakrangee Manpasand and PC – forgetting that it’s a unusual proxigean spring tide. And as we have all heard before —  that all s*^@# rises in a high tide. Some fund managers like Porinju(having faced perhaps the maximum erosion in their recommended portfolios) have been graceful enough to publicly accept the same and have learnt their lessons. I have great respect for people who have a clear intent and are quick to concede defeat when defeated and are quick to self-deprecate and crack a joke on themselves. Hats off Porinju. Your recent confessions hold you in good stead with small yet well informed investors like me.
Some relatively bigger names in money management business who have destroyed a much larger share of the savers wealth are finding ways to repackage some established theories  of legends such as Benjamin Graham (BG) and Buffett (WB) to avoid backlash and scrutiny. Some are repeating BG’s theories of quotational losses and appearing in full page interviews.
The public opinion is rife as to why the regulator of markets (SEBI) has introduced a volley of measures to simplify the mutual fund industry by reclassification of schemes and defining the size of companies on basis of market cap of companies and % of funds invested in a category of companies.
What’s wrong in it. Actually nothing.
Mutual funds and fund managers had created an ocean of incomprehensible financial products where schemes were being launched such as special situations, arbitrage, emerging companies, vultures picks, future stars etc etc. Just the names of the new schemes were being used and repackaged to amass fortunes (read expense ratios and bonuses).
Basically, all of this is a demonstration of the fund manager’s alleged belief and necessity at that point of time to launch  new schemes using publicly available information based on specious research.
And the market regulator tried to streamline this so that the gullible investor, reposing trust in the mutual fund – basically the fund manager, sees some method in madness.
Indian markets are most volatile for the following reasons. The size of speculation is 29times the real market capitalization. For the record some of the most sound and advanced and mature markets such as the USA, Germany and the UK have just 3-5 times the size of derivatives markets in comparison to the  cash market.
So I am in absolute awe of the regulator that all the recent froth in the market was removed judiciously by introducing mechanisms such as ASMand increasing the margin money requirements in the F&O trades. And it surprises me that investors are acting and reacting adversely because SEBI has introduced measures that will allow overheated and irrational markets to cool off and that will reduce the sheer gambling in the garb of investing.
I know of 2 middle class retired uncles who leave home every day with 10k of their pension money, leverage and take positions worth 8-10 times, get wiped out with just a 5-7% volatility in the prices and come hope sheepishly only to restart the next day to recover their losses. Derivatives are definitely weapons of financial destruction as they have no underlying asset/value and are merely an arbitrage between one person’s fear and another’s greed
I am shocked when people ask me questions – do you play markets. PLAY? I ask – is it a sport?
Statistically speaking, If you simply play an odd even on a roulette in a casino you have a better chance of making money than investing in the markets.
So, in this maze of multiple schemes, thousands of options, there is just one reform that SEBI needs to implement that could be a game changer in the interest of a common small investor.
That reform should be called the ‘Skin In The Game’reform.
I have a 10-point recommendation for the entire MF and PMS industry where creative marketing and false promises disclaimed by reams of fine print are called out.

Some advocates of democracy might start jumping and call this preposterous. But how else do we curb counter actions by people acting in concert against the interest of small saver.

Yes, it’s a tough proposal but then if a fund manager wants to earn hefty bonuses, he must figure   this out and have a complete skin in the game.
And lastly the law around this should be so robust and penalties so humongous that no one can pull off a Houdini on investors.
Rajat Gupta – the poster boy of Indian diaspora was pulled up badly and almost destroyed by the US law for one small mistake of his. The readers of this blog all know in their heart of hearts that almost every promoter and every insider of a listed company in India indulges and misuses the insider info for personal benefits. Would anyone accept that ever anywhere else in developed economies? And would Indian law be robust enough, ever, to instil the fear of God??
Only God knows………
manu also writes in The Huffington Post

7 thoughts on “‘Skin in the Game’ Reform: A Game Changer in the MF and Wealth Management World to Save the Retail Investor”