Two incidents moved me recently…
Firstly:
Just as I was about to tee off at the Milpitas Golf course this September I heard a ‘fore’ and was fascinated to see a fellow golfer tee off from the backyard of his home. I thought what a life/luxury.
I realized that this 7200 yarder golf course is inhabited by a mere 50 families and Zillow(the app that correctly dispenses info on real estate prices) indicated the price of each bungalow between approx. 1.1 – 1.3 million USD (approx. IRs 7.5 Cr)
One cannot ignore that US of A was built on the premise that the infrastructure (rail, road, bridges etc) are the bedrock of economic activity and the growth of any nation. And USA has by far the best infrastructure in the world. 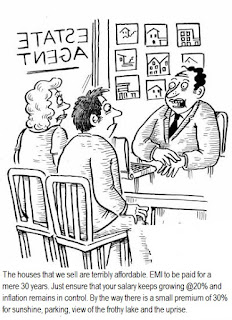 Secondly:
The chief accountant of one of the top three builders in Bangalore visited me looking for a job and shared that the builder hadn’t sold more than 3 apartments amongst its entire national inventory in the last 4 months.
After my 4 week sojourn in the US, when I returned back to India, still in a state of daze, it took me a whopping  2.5 hrs to travel a distance of 30 kms from the airport to home and along the way in a traffic jam, I saw a larger than life hoarding of an apartment built by a top Indian builder offering a 4 bed apartment “starting at ‘only’ 6.5 crores” about a million USD.

Sadly, I believe my mom will never see a proverbial roof over her son’s head in the near future.