Martians, Modi and A Challenge for The PM

For the fear of being left behind I thought it imperative to opine on my Prime Minister for whom I voted and also wanted to write a non economic, easily comprehensible, data-free article that anyone can understand especially my international audience. 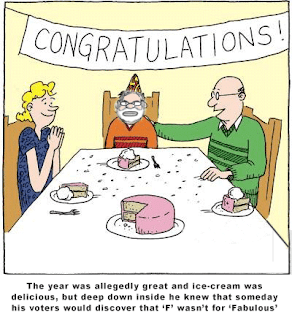 I haven’t been as amused lately as I am now, looking at the various marketing machineries for Modi who has been creating an aura of invincibility and humbling the achievements of Mangalyaan in comparison of what the Ironman has achieved in the last 1 year.
Let’s ignore the following few things in the credit of Modi and imagine that aliens from Mars are responsible for these and not the government:
Now let’s safely assume that a few of these amazing global tailwinds were all because of Modi’s charm that he spread, during his global sojourns:
While the captains of the industry aren’t getting enough opportunity to praise Modi for what he has done for the country or its economy, since no one dare displease him, my report card for my Prime Minister is as follows.
I am a common man – very middle class –  simple things matter to me.
Each day, as I read about the plan for 100 smart cities in India, I only look towards the skies and musingly ask God – “Are you kidding me?!”.
I keep looking for the ‘acchhe din’ or good days that were to come with Modi.
So much talk about a corruption free country. But just recently a policeman in Bangalore fined me in cash and even gave me a discount upon negotiation. Was fined because I went on the wrong side of the road. A pertinent point to be mentioned here – Bangalore is the only city where, on a few roads, one must drive on the right side instead of left and those new to the city are supposed to know this by birth!
It’s all a big sham!
Governments have only marginal utility.
For a commoner, it’s like selecting an outsourced security guard for your premises at minimum wages with minimum expectations and hoping that when one day the real need arises – this fellow isn’t sleeping.  Otherwise most of the time – he’s just half dead – although he’s still there.
While a lot of columnists and senior journalists are busy writing the government’s scorecard, discussing his performance in incomprehensible semantics, I want to give Modi a simple task –
India approximately has an area of 3.2 million sq kilometres. Mr. Modi, please pick up any 100 only hundred sq kilometre (.03%) area of your choice anywhere across the length or the breadth of this country and convert it into a place where:
Just maintain it for one year for the world and your voter to see.
And then we will do the swachh bharat and talk of 100 smart cities – please.
In the meanwhile it would help to spend some time in your country rather than making innumerable  trips abroad unless you want to cover it all before the oil prices start going up.
You are a good man Mr. Modi – and I think you’ve got the vision right. But vision must be followed by strategy, which must be followed by execution and metrics – and my Report Card says – you still have a very very long way to go. In the reportcard, at best, you get a Minus B.

2 thoughts on “Martians, Modi and A Challenge for The PM”