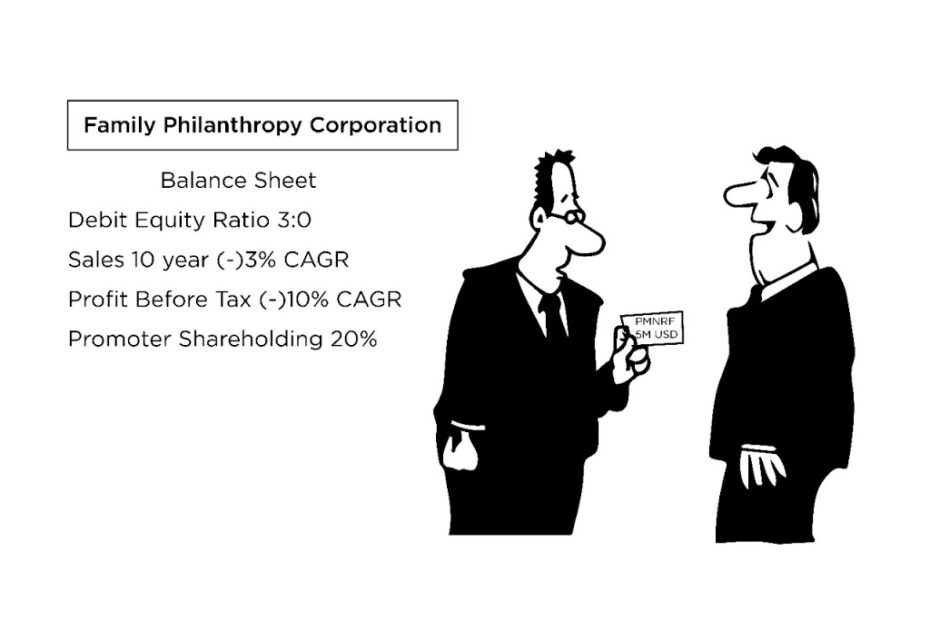 Corona Virus is a tragedy, the likes and intensity of which, this planet hasn’t seen in more than 100 years. While this will change the basic behaviour of us humans, in ways that we can’t fully fathom yet, everyone (esp the stalwarts of the industry and more specifically promoters of listed companies) getting sentimental and pouring their hearts and coffers out for the relief measures must remember a few things.

I speak in all humility and with the audacity of hope that this too shall pass and will pass soon enough because of the resilience and intelligence of the human race.
But……
This honest request is to the promoters of those listed companies who are collecting all brownie points and gloating by appearing with pictures/selfies of multi million dollar cheques on TV Channels contributing to the COVID relief funds – in a hope that MOCA (Ministry of Corp Affairs) and PM himself will pardon all their creative accounting jugglery and sins pertaining to corporate governance – spanning years.
The biggest joke was when Yes Bank recently contributed to COVID relief partially at the expense of taxpayers and partially the minority shareholders (lets call them muppets for the purpose of brevity)of SBI. And an amazing thing about all this is that no one calls out this hypocrisy – loud enough.
Some of the top/most respected business houses in India are trying to be the paragons of virtue during these trying times, committing thousands of crores and last drop of wealth etc – while conveniently forgetting that the share prices of their companies are at decadal lows, their business decisions have indebted companies to the extent of tens and tens of billions of dollars, are on verge of defaults on many fronts and have millions of muppets wiped out, and in private domain they are not blinking an eyelid while cutting salaries of staff members across board, of the very people who have stood by them for years/decades.

It’s the saddest moment in the life of a promoter of a listed company when he fails to protect the capital of a muppet. – as ‘SIMPLE’ as that..
Give with heartful and handful to the cause – Nation needs it most currently than ever before – Nothing wrong in it.
But give whatever – from Your personal net-worth that’s accumulated over years and drawn salaries and perks over long periods of time / ownership – mostly at the cost of the muppet.
Try not to screw Your own company twice-over.

Because…………….
Remember if you give 100 Cr to philanthropy while owning just 50% of the company all of your ‘mis’-decisions are being financed by ‘ME’ and I am paying the balance 50 Cr – ‘THE MINORITY SHAREHOLDER’.
In most of the cases the over-leveraged companies just vanish over  time while leaving a trail of destruction for Shareholders and Financial Institutions.
A law must be put in place where salaries and perks of the promoters of listed companies are a function of ROCE, ROE, Leverage, Dividend Yield and these are the only metrics that will align the interest of the alleged manager with that of the shareholder.
AND
On the other hand its just so profound and Godly what people like Akshay Kumar and many such individuals like him are doing and continue to do for humanitarian causes. These individuals are citizens that make our nation proud and we will forever be in their debt of gratitude. What Akshay does for armed forces, their families and being almost always there to help selflessly is the stuff of the movies – literally. And his latest act of this large contribution to COVID relief is truly remarkable. What he said to his wife moved me “I had nothing when I started and now that I am in this position, how can I hold back from doing whatever I can for those who have nothing”
Look at the life of actors. They are the 100% owners of their enterprise of talent, have limited shelf life, could be out of favor/flavor with just one movie flopping at the Box, are entirely responsible for their personal balance sheets and profitability, carry a 100% Key Person Risk, Yet are among the highest tax payers in the country – as they can’t hide behind the circuitous veils of tax evading corporations and behave like the promoters of these. And inspite of so many risks they truly demonstrate in action and spirit what being a Good Human Being is all about.

Hats off Brother Akshay – More power, steely resolve and long life to You.

And in the meanwhile, can the muppets get their voice and their act together and create a movement against us all being ripped off.
God bless You all and God bless this planet