Just recently as I was sifting thru the ashes of my grandmother trying to find the last few solid pieces of the bone (to be taken to Haridwar to be immersed in the Ganges – a hindu tradition), I reflected on the purpose of life, on the way human beings are judged and how life is really so short. When we are born we are about 7 pounds and the lifeless pieces of bone that get left behind in a small sac are also about 7 pounds. 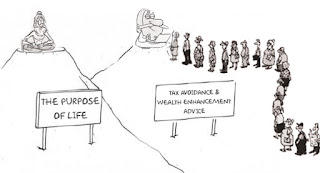 Some gut feel encouraged me to visit her during the last week of her life and I spent a few precious hours with Biji (as we fondly addressed her). Her rhetoric hadn’t changed in years. Worrying about the unmarried, the unwell and the childless in the family. At 88 She had an elephants memory and a sharp mind. The welfare of her 6 brothers, 4 daughters, their kids, and about 100 souls on her direct radar seemed to be her sole responsibility that she felt God had bestowed on her.
The futility of her worries almost always irked all her grandchildren till we laughed and made fun and she would get annoyed. But what a towering personality she had. Everyone was scared of her out of respect and then one day she didn’t wake up. Passed away peacefully. And emotionally orphaned so many of us.
At the funeral I was overwhelmed to see over 350 people who travelled from significant distances for this 88 year old woman and that’s when I got a rather significant lesson of life.
In this short and insignificant life (on which I wrote a piece in my earlier blog) and on your last day on earth, no one will judge you for the car you have driven, or the size of the house you had built or the money you made in your life. For ‘some small time’ people will remember you for the love and affection that you left behind and the respect you garnered through your deeds.
Lesson
We fretter way too much about updating our career resumes and LinkedIn profiles. All of this is important as a small means to an end and in the 80 year runway that a human being has, – Yes do give importance to the career resume. But don’t leave the sight for a second of Your life resume.
The only thing that matters (as David Brook says) is the obituary/eulogy resume.
This 88 year old partially educated woman who had weathered the partition of India – lost her husband at 44, a son when he was 38, and always had a bare hand to mouth existence had an almost perfect eulogy resume – and that I figured out when I saw the moist eyes of some 350 odd people.
Does anyone remember Babur in 1526 and how the Mughal Empire was established. In years between 1526 and 1857 (merely 331 years) art, architecture, language, textile, shipbuilding and steel-making was so evolved that by 1750, India produced 25% of the world’s industrial output. No mean feat by any stretch of imagination. No one on this planet has been able to replicate Shahjahan’s Taj Mahal built in 1632 despite all the architectural advancements. Pertinent to note that Shahjahan died a prisoner – not able to fully appreciate his creation.
Bahadur Shah Zafar  the last Mughal died in 1862, a despondent, in Exile, a prisoner and with no control over the legacy of 4 centuries marking the end of one of the greatest Empires.
Lesson
You will be remembered if you create a Taj Mahal (symbolic). Else you are just wiling away time in a futile hope to leave a mark. Bill and Melinda Gates will be remembered for having eradicated so many diseases on a major part of this planet but God-No – not as much for Microsoft. Anyone who judges you on a so called QOQ or YOY and anyone who feels pressured by the same is a just an inconsequential organism in the spectrum of humanity and evolution.
Would anyone remember the stock price of Amazon or Apple, 50 years from now. The infinite powers of evolution would have made present innovations and technologies obsolete in less than 50 years and most of the companies and human beings alive today – would be dead.
It amuses me when I hear of jargon such as ‘wealth creation’ ‘competitive advantage’ ‘barriers to entry’ ‘sustainability’ etc etc. It’s all so shallow and meaningless.
Endeavor to do something remarkable that will last beyond a quarter or a year or 10 years. When collectively each one on this planet endeavours to create a symbolic Taj Mahal, many Taj Mahals will eventually come up.
Grandmother operated her life in a binary manner. Pass/Fail, Good/Bad, Right/Wrong. It surprises me that everything in the present world is grey nowadays. He is good – but, he is right – but, we should do this – but, I agree with you but letme come back to you …….
Lesson
In this short life have the courage to stand by your values and convictions. Love and befriend humans and do it with all heart and unconditionally. Hate – and do it with grace and enough vengeance that only the fittest survive in the interest of humanity. People who compromise on principles and values die every single day in an already short life.
I will miss you Biji – you led a simple and graceful life and your death taught me the life resume I would want to build.
Manu also writes on Huffington Post
Twitter @manurishiguptha