What Infosys’s Vishal Sikka’s tenure teaches us about ‘ Strategy ’

Recently Wipro’s Azim Premji and Infosys’s Vishal Sikka made joint statements about the stresses and tough times that lie ahead in the Indian IT sector and how the global factors have caused immense uncertainty – I agreed, for its been 2 years that I have been – through this blog, making a case that greed, unsound economic decisions and self-fulfilling political pursuits by nations and central banks have pushed the world to a brink of dangerous unanticipated consequences and that the present prices of ‘pretty much’ all asset classes are unsustainable. 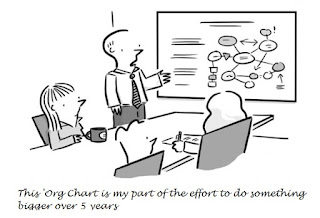 But this piece is about strategy. I read this word so often that I am now almost sick of it. Speak to an over enthused student at a business school – he wants to excel in strategy and make a career out of it, speak to a new CEO – he would talk of a 10 year strategy and vision and make the incumbent employees feel scummish for their lack of strategy and vision, speak to a consultant (highly paid youngster at probably the big four with all authority and no responsibility) and he would regurgitate so much on strategy through his 100 page presentation that the customer would really start cursing the historical past, when the consultant wasn’t on board.

Well strategy is fashionable, it sounds great – but in reality its bullshit. As Peter Drucker says Culture eats strategy for breakfast everyday
200 years ago when nations orchestrated wars to take over other nations and land masses across the oceans, strategy made sense. A strategy once made could remain relevant for 50 years as letters and information could be sent/received over sea/horses at most twice a year. Officers of invading nations had orders to execute a decision and the same could be reviewed only after a few years. Results to judge successes or failures was possible – at best – over a decade.
Today all it takes is a tweet by Trump to make the price of fortune 100 company crash or a claim by wikileaks to make Hillary lose a winning US presidential election or a unfounded misinformation that encourages a nation to invade another and create a world havoc that is likely to have a century long ramification.
Disclaimer : Now I don’t know who Vishal Sikka is or what he stands for or what he brings to the table and I have nothing against him. He is just a case in point because I remember him as a non-promoter Indian to get the highest salary in India, to get an annual compensation of about 6 mill USD besides all the stock options. But I read 3 newspapers everyday to have a fairly good memory and to form an opinion.
When Sikka joined Infosys somewhere in June 2014 as the first non-promoter CEO, he was the next big thing in India. He talked of strategy and he talked of vision and the world took notice. The stock price of Infosys soared and he became the poster boy. At the time of his joining, the annual revenues of Infosys were about 6.9 billion USD and he talked of a six year 2020 vision of 20 billion in revenues. ie a approx. 2 billion increase in revenues each year. And he maybe got more bonus. Many of the rockstar executives who built Infosys over last 2 decades, allegedly quit out of frustration.
This reminds me of the despicable Jack Welch who made a fortune for himself but made the most ruthless organisation by firing 5-10% of workforce every year. As Simon Sinek says, companies that sacrifice their people for numbers rather than numbers for people aren’t built to last.
So as time progressed Sikka’s rhetoric of his vision became louder and the performance became quiter at about 7.9 billion USD in FY 2016 but he still maintained the gusto of his rhetoric.
The last Q3 FY17 results of Infosys are due on Jan 13th 2017 (oops that’s a Friday) and Sikka already warns of tough times ahead and by the way all of it is the fault of BREXIT and Trump.
And going by the HY (half year) run rate of FY17 Infosys will achieve about 9.5 billion USD in annual sales. With three years to go for 2020 – a 3 billion USD per annum increase.
Whats the point:
Its not Sikka’s fault. He has no role to play. The multitude of global factors and externalities are so diverse that any CEO or alleged strategist who talks of a 10 year or a 5 year strategy is only fooling himself or the board.
Its good to have a general aspiration (call it vision) for next 5-10 years. But having a 5/10 year strategy and a promise can help you get a bonus but all that matters is the next few quarters.
Companies are wasting too much time on vision and strategy not realising that merely a tweet, a simple geo-political externality or an event on which no one has a control can change the dynamics of our aspirations and strategy overnight.
Boards must realise and encourage the following:

And lastly for GOD’s sake – stop talking about strategy and start working on culture.