BlackBerry And The Art Of Becoming Irrelevant in the Business World

Around the time when Mark Zuckerberg was floating around in the dorms of Kirkland House figuring out Facebook (FB) or allegedly plagiarising the Winklevoss brothers’ ideas, the market cap of BlackBerry (BB) was about US$64 billion.
Fast forward to 2015, the market cap of FB is at about US$225 billion while BB is less than US$6 billion.
There was a time when owning a BB was associated with busy high-level corporate executives who always felt the need to be connected and have uninterrupted access to their e-mails while on the move. The BB Messenger also known as BBM — an Internet-based instant messenger — was a really clever innovation, a sort of wonder that allowed people to remain connected without paying exorbitant prices on GSM texts.
The BB was seen as a well-guarded bastion when it came to security. The best of the hackers around the world could not break the encryption codes of BB. Some pockets of US government including the White House still completely rely on BB since there isn’t a platform as secure as this. BB owns some 44,000 patents that form the bedrock of its intellectual property.
But when Android was taking over and becoming a preferred platform for mobile software, BB couldn’t see the train coming head on and made three fundamental mistakes that have rendered it irrelevant forever.
These mistakes are similar to those that many companies make in today’s business scenario.
1. Overconfidence in one’s ideas and existing business models
The clichéd saying “change is the biggest constant” is more conversational than truly understood by the majority. Polaroid, Kodak, Xerox have all become irrelevant and BB had ample opportunity and intellectual capital to correct its course at the right time. But hubris isn’t only personal and human, it’s organisational as well. And hubris can do you in. Resistance to change and resistance to new ideas and new paradigms can be suicidal.
BB was an amazingly evolved tech company and was at the zenith of its popularity. But its pride and its belief in its supremacy didn’t allow it to evolve and open the platform for creation of apps and allow developers to use that platform for creativity; Google’s Android did. When BB’s market cap was about US$64 billion, Google’s was about US$35 billion USD
On most occasions I disagree with Michael Porter but here I vehemently agree. BB had created an amazing barrier to new entrant and it just scuttled it away.
2. Delay to act in the face of an approaching train
Imagine you get stuck on the tracks of an oncoming train while you are with a group of people who are only going to follow you and listen to you (read CEO). You are supposed to shout at the top of your 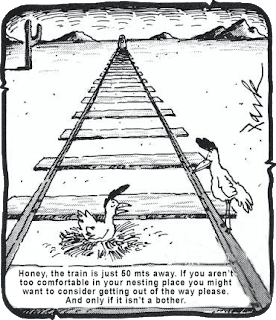 voice and get your followers (team members) out of harm’s way. And yes you have to
scream on the top of your voice. You cannot say,Excuse me – there appears to be a moving object that vaguely looks like a speeding train and if I ain’t incorrect it is seemingly moving in our direction and for our safety, we must just step aside, please. What you need to say is Get the *&^% out of the way.
Strategy strategy and (oh my God!) strategy. This word has consumed more than 80% of the educated world especially the folks from business schools. And there is less action and more strategy in the corporate world today. Parkinson’s Law.
Someone within BB needed to see the onslaught of WhatsApp. By the time BB figured out that their BBM messenger had to be on an open platform, and WhatsApp had to be BB compatible – it was too late. WhatsApp spread like an unstoppable virus and before you could say Jack Robinson, WhatsApp was a 300 million strong community. Jan Koum started WhatsApp as a small initiative to circumvent the inflated GSM texting costs and that became the nemesis for BB.
3. Failing to protect the consumer’s interest / pocket
I love the phrase ceteris paribus. All other things remaining constant, the cost to the consumer must be the lowest in an efficient market. You cannot have a product that’s pricey, not-so-good looking, expensive to use and still running on technology that’s at the end of its product lifecycle.
BB hasn’t thought of introducing a dual SIM mobile phone till date. In fact, until they launched their OS10 about 24 months ago, consumers had to subscribe to a BB plan with a fixed minimum monthly cost of Rs 300 (approx US$5) in a country where average revenue per user (ARPU) is Rs 95 or about US$1.5. Frequent travellers, price-conscious consumers figured out the virtues of carrying two SIM cards for various purposes and taking full advantage of various talk-time plans. Samsung with its duos range at the right time of “need lifecycle” launched dual SIM phones and changed the game forever. Almost all manufacturers now make dual SIM phones but Samsung is far, far ahead of the curve and BB still hasn’t figured it out.
BB wrote its own obituary way too soon due to inaction or absence of speedy action at the right time.
Don’t let that happen to your company.
Manu also writes in Huffington Post