The Story Greed, Deceit and its effect on Organisational Culture

When I first read Greg Smiths resignation letter 3 years ago on the ides of march, I knew something wasn’t right in the way financial institutions operate. A myriad of thoughts ran through my mind.
When we trust the people who advise us and implicitly follow the financial institutions that handle our hard earned money, we believe that we are buying professional advice at a fee that is normal. 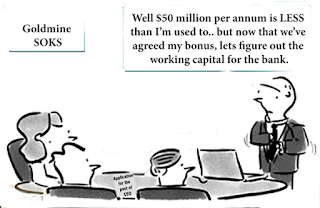 Reality across the financial institutions is far from it. The very fundamental of NIM (Nett interest margin or commission on transactions)  that forms the bedrock of investment banking or simple banking stands compromised when a client is referred to as a muppetor transactions are done to make a ‘hit and run’.

I am going to tell you 3 short stories here:
Greed part 1:
Yes “Hit and Run”. I have lately come across this word so frequently uttered incestuously by entrepreneurs who are doing the so called series A,B,C ‘or whatever’ funding of their amazing sustainable scaleable ideas in the hope of founding the unicorns
or
the very people who are funding these, each one hoping to find a ‘muppet’ before passing the parcel stops and the last muppet obviously files for Chapter 11.
At a time when 7 trillion of global market cap has been eroded in just 1 week between 24th and 28thAug 2015, the net worth of Lloyd Blankfein has shot thru the roof . He happens to be the CEO of the most coveted investment bank on the planet  and is now a billionaire. Obviously he has found his muppets right.
The incapability of the human mind to connect the dots and take informed decisions leads to severe imbalances that keep aggregating to unmanageable proportions which eventually become endemic on a global scale.
In the early part of 2008 Murti of Goldman Sachs predicted  crude at US$200 and would have found thousands of muppets to dump oil futures and earn hefty bonuses in trading commissions and thereafter till the Feb of 2009, crude only accelerated towards earth to breach below US$ 40.
By the Dec of 2014 when the crude had already fallen to $65 from the $110 levels Goldman went on to predict a $40 level in the coming months and I am sure would have amassed billions in commissions on the base of their specious advice to gullible investors who were trying to get a positive alpha on their investments.
At the time that this piece was being written the crude was around $37.
What amazes me is the blatant manner in which these ‘super’ financial institutions such as Goldman Sachs etc across the globe misguide and get away with it and no real regulation has been formulated till day to make these goliaths accountable. No one seems to have a clue of what they are talking. They only seem to be in a perpetual search for muppets.
Greed part 2:
When all the top financial institutions collude to create a epiphany of deceit to fix the loan markets at the cost of billions of retail borrowers across the world to make supernormal profits, they start fixing LIBOR. Tom Hayes might be the face of the scandal and now a state guest for 14 years but can you even begin to imagine that the LIBOR which is allegedly the most transparent measure of global financial health was fixed fraudulently since the last 3 decades thereby making loan seekers pay larger than required interest rates and in every way feeding the bonuses (linked to profitability) of the bankers across the globe.
When fraud is at a mass market level, it’s in every ones interest to hide it – for its impossible to convict 80% of the bankers.
Greed part 3:
It was a sad day on the wall-street when Sarvashreshth Gupta a 22 yr young Goldman Sachs analyst jumped to hisdeath after complaining of 100 hrs a week work and ridicule by his boss and unreal timelines and pressure to complete presentations. When he left India as a student of Pennsylvania University, the family would have seen no end to their happiness – for dreams come true when you travel to new countries for education and jobs and money. But sarvashreshth was being made to feed someone else’s greed.
Moral of the three stories:
At an extrinsic level these might be isolated cases of individual frustrations / failures / or misplaced ambitions that the media would make these sound. But at an intrinsic level these stories are a reflection of an irreparable rot that has infested the corporate culture where irrational demands and insatiable expectations of abnormally higher profits make people do things that are outside the subsets of propriety.
Culture in families, in organisations, in countries and on the planet is a function of varying degrees of greed and righteousness. The global culture now sits on the bedrock of an ultra-capitalised greedy planet that is only working towards higher and higher profit and bonuses.
Unless the captains of the industry such as Blankfein and hundreds like him don’t take it upon themselves to get rational in their greed and change the corporate culture, and let the results, profitability and achievement of Annual Operating Plans be a function of organisational culture having underpinnings in happiness, care, trust, patience, compassion and not simply a mindless pursuit of month on month profit, the talent and lives of people like Greg Smith, Tom Hayes and Sarvashreshth Gupta would continue to get wasted.

We are born to be ‘naturally’ truthful and happy and stress-free and cohabitate peacefully on this planet with each other. Greed and fraud and deceit takes a lot of effort. The choice is entirely ours as to what seeds we want to sow in our respective organisations that would eventually form the ‘corporate culture’.
Warren Buffets white knight investment into Goldman Sachs in 2008 might just have been his life’s biggest moral mistake.
And next time someone tries to sell you a capital protected market linked investment/insurance plan (which only God can guarantee) give that fellow a tight slap and start running away from him for such a thing doesn’t exist and will never exist either.

6 thoughts on “The Story Greed, Deceit and its effect on Organisational Culture”