Dollar’s hay days are almost over 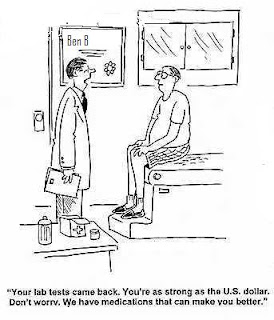 Saddam Hussein was a tyrant and he cannot get any sympathy for any of his actions. But he was not executed for what he did to the Kurds or the alleged possession of weapons of mass destruction. He was executed because he started selling his oil in Euros.

For a significant period of time the US of A has been an effective global policeman. And rightly so – because if not US then who?

But the world’s biggest consumer of goods and services has been brought down to its knees by its over zealous spending population and the country is running a deficit of trillions of dollars that is likely to be its waterloo.

For as long as Americans continue to be the world’s largest (and biggest) consumers, no one can take the mantle away from the US. But gradually as the spending patterns shift and wealth shifts from the west to the east, the US$ will slowly and gradually bleed itself to death as the worlds reserve currency.

History has it. This is exactly what happened to the erstwhile reserve currencies of the world – Roman Dinar, Spanish Reale and the British Pound. The reserve currency status has allowed the country and its populace to live beyond its means and eventually be displaced forever.

UN says ‘New reserve currency must be found to end dollars undue privilege’, and rightly so. Because dollar has been and is the reserve currency, Fed could afford to simply add a few zeroes to it’s balance sheet and print money. Some say and ‘couple’ of trillion dollars.

If any other country had created a financial mess that the US and its bankers created, it would have been worse off than Zimbabwe, with a billion dollar note cheaper than the intrinsic value of a toilet roll.

This cannot happen overnight for dollar. It will remain strong for a foreseeable future but small incremental deterioration in its strength is inevitable and the world is beginning to take cognisance of this fact.

Is there an alternative? – No!! No country yet has either the intellectual or financial capital to challenge the dollar. China is too autocratic (almost harmoniously dictatorial), India a bit too nascent. But these two countries are formidable forces to reckon with.

It doesn’t matter how much China rants about the US$. They have financed the American debt of over 770 billion dollars in addition to their dollar reserves of over 2 trillion. So they need to ensure that the value of their investments is maintained. But future investments by countries must be in line with simple rules of portfolio diversification.

The moral of the story – Portfolio diversification reduces the un systemic risk. Invest while the world is still sceptical or else market efficiency will eliminate potential profits.

Where to invest – Renminbi, Indian Rupee and Euro…..

1 thought on “Dollar’s hay days are almost over”