Sureshot failure of Ecommerce and its underpinnings in the Indian mindset

A few days back I was oppressively put off by a mountain of garbage on my way to work and this area is Koramangala – The fulcrum of ecommerce revolution in India, with highest per capita in the country,  home to dozens of startups, stone’s throw from the offices of flipkart and Accel partners (the posterboys of ecommerce and PE funds). 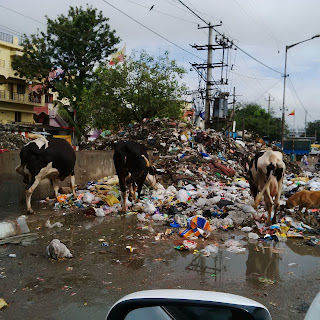 While my belief in Modi’s Swachh Bharat and Acchhe Din only sees a new low with each passing day of his PMship, I couldn’t help but draw a few correlations and predict with a degree of confidence that – E-commerce in India will never be a success story and the reason behind that is the basic Indian mindset.
I will tell you how:
The basic premise of the digital economy or E-Com companies is a change in peoples buying habits. Amazon has successfully demonstrated that they have changed the mental wiring of their customers and have made them habitual to buying online and when you induce this change, customers buy more and eventually these customers will pay a premium for  the convenience of ordering and returning goods from home and will pay for the entire spectrum of services (order, delivery, product, return, reorder) and still leave a penny or 2 on the table for the Jeff Bezos of the world.
And hats off – Jeff has swung it beautifully and successfully induced a change in the buying habits of Americans
But India is an exception. Because You just cannot change the habit of an Indian.
Kahneman’s theories on cognitive studies demonstrate that humans think and develop in a very linear manner. And same set of people cannot have different personalities for different situations.
CharlesDuhigg’s (of the New York Times) studies demonstrate that Habitsare formed after a person has learned something new, like how to parallel park. This process engages the basal ganglia, or the part of the brain located in the prefrontal cortex that works to start and control movement and emotions. From there, it’s a three step process to a “habit loop.” There’s a cue, or trigger, which signals to your brain to turn a behavior into an automatic routine (say-throwing the garbage at a wrong place), followed by the actual routine of the behavior, and then the reward. The reward, Duhigg told NPR, is the brain’s own personal cue for when it should recall the automatic behavior.
Once that happens, the brain takes a break. “In fact, the brain starts working less and less,” Duhigg said. “The brain can almost completely shut down. And this is a real advantage, because it means you have all of this mental activity you can devote to something else.” For example, Wood cited one study, which found that participants in the habit of eating popcorn at movies would eat just as much stale popcorn as those who were eating fresh popcorn. “The thoughtful intentional mind is easily derailed and people tend to fall back on habitual behaviors,” she said. “Forty percent of the time we’re not thinking about what we’re doing.”
So whats the point:
When despite all the education and rising incomes and improved standards of living, Indians don’t hesitate to dirty their corner just outside their homes and continue to litter (and I saw someone throwing a big garbage bag straight form his Audi A-8 contributing to the record breaking height of this mountain of garbage) and continue to live in a pretence of oblivion and there is no evidence of evolution in the corrupt and inhumane character of an Indian by and large, thereby proving that education , income and habitation doesn’t change the inherent character, how can the half a dozen Bansals (Sachin Binny Mukesh et all) ever hope to change this personality when they eventually decide to stop burning an average of 10 mill USD per day (an approximate sum total of cash burn per day in the form of various discounts and schemes in the digital economy space in India).
The customers will simply stop buying when they stop getting discounts.
Because Indians cannot change….
Another disappointing character trait was demonstrated by the citizens of Delhi who worked hard to make the odd-even fail by simply buying the alternate numbered cars. An initiative that’s successfulin some of the most developed countries was virtually held hostage by selfish citizens who would rather live in one of the most polluted cities in the world and thereby putting their and their families life in harm’s way but would not allow a government initiative to succeed – which is a proven success elsewhere.
Because Indians cannot change….
And perhaps in a country where we allegedly assumed an infinite potential in the Ecom space, the harsh reality is starkly different.

The game of musical chairs is on in full swing and while all the players are dancing in the cacophony of this boom, assuming that there are enough chairs to grab – In reality there aren’t any at all.

You can write to : manurishiguptha@gmail.com