The case for a perpetual Christmas 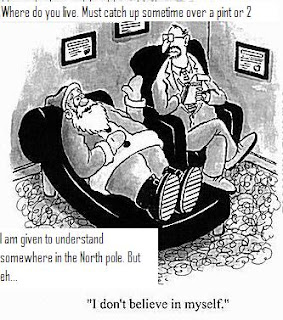 Recession has been the most pronounced word of 2009. Some call it the credit crunch, some just blame it on their respective governments, some blame their luck, the economists write articles analysing the happenings through a seemingly intellectual eye. My understanding is rather simplistic.

Imagine a boat ‘the universe’ which is sailing in balance and suddenly everyone moves to one end. It is most likely to topple because of imbalance. This imbalance can be irrational exuberance (2005 – 2007) or unsolicited fear (2008-2009) and that’s what we precisely saw in the last 5 years.

And lack of confidence is preventing the recovery because people are overtly fearful.

Has there been any significant change on this planet? NONE. The same number of people have same ambitions and aspirations and same desires. People over spent and over consumed and stoked an artificial boom that could not be sustained. NOW they are under spending and preventing a recovery.

But Father Christmas is an exception – His birthday is celebrated with unparalleled zeal. He induces hope that is illogical and belief in magic that is never seen. Young gullible children are made to write their wish lists early in December so that the lists reach Santa well in time. People over spend, over consume, become irrationally happy, develop unsustained hopes and promises only to realise that Christmas does not last forever.

Credit card defaults, home repossessions and financial exigencies are quite typical of any January and Santa is missing. Because Santa does not exist. December creates an imbalance towards one side, January towards another.

Why can’t Human beings learn to be rational? Be positive all year round. Live within their means. Invest wisely. Spend for all their needs but none for their greed.

And we will never have an imbalance and will stop expecting Santa to do miracles.

Or simply put – Have a year round Christmas with rational exuberance.

2 thoughts on “The case for a perpetual Christmas”