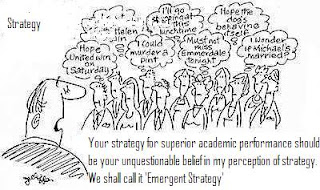 Academicians have a habit of mutating well established theories, changing a few words, mutating the shape of models and reintroducing the old wine in a self styled bottle.

Google (verb.) ESCO – it means nothing to anyone on this planet (not an iota of connection with strategy) yet students who did not believe in the ESCO model were allegedly the lesser mortals in the world of strategy.

No one really knows what was in Soichiro Honda’s mind when he changed course in the US. The decision to market small Supercub bikes after the dismal performance of Honda’s larger ones has been conveniently described as an emergent strategy. It has been discussed with great vehemence that Honda Motor Co. did not really know what it was doing and therefore it was an emergent strategy.

Can the confines of a classroom discredit the decisions of a great man or a great company?

I spoke to many colleagues in leading business schools and while HONDA is a popular case study no one associates the success of HONDA to an accident a.k.a emergent strategy.

Some believe that HONDA deserves credit only for abiding by the allegedly Japanese ‘belief that corporate direction evolves from an incremental adjustment to unfolding events’. If HONDA had just been incrementing along, it probably would not have moved so early into the US market in the first place. Even while HONDA sold through trading companies in all of SE Asia, it chose to sell directly in the US because of its founder’s strong belief that for a product to have a global acceptance it must succeed in the leading market.

A realm of strategy that has been little discussed is Commitment. HONDA was committed to being successful. The decisions that it took between 1952 and 1960 were irreversible. Capital investments, R&D in cleaner and fuel efficient engine technology put all other development on hold for several years.

This is commitment.
This is strategy.

And let’s not take the credit away from Mr. Honda by nomenclating his decisions as emergent strategy.