Golf courses are known to be the playgrounds of the rich and the famous and I have heard that people strike big business deals there. For me the experience was entirely different when during an idyllic Sunday in early 2000, while playing at the Annadale golf course, my path crossed with Brig. R. C. Shard on the 8th hole. 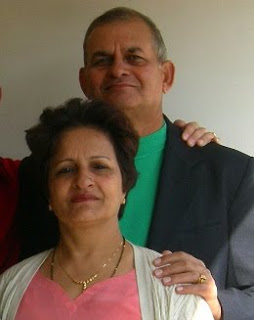 He said “Son seeing you for the first time on the course, you seem to be a promising golfer”.
And that was the start of the most beautiful relationship that is my most treasured treasure till this day.

Brig. Shard, then Col. Shard was the Col.Q for Army Training Command and had recently moved into town. He subsequently invited me home for a dinner and rest as they say was all history. Even while I called him a friend he endeared me as his son right from the very initial days of our acquaintance. I was the General Manager of a hotel but longed for a home as my jobs and travels had kept me away from my parent’s home since 1992. Mrs. Ira Shard would call me home now and then whenever she would make ‘Rajma’ (kidney beans made in a certain style and extremely popular with north Indians – which I loved to eat) and later I would simply tell her that I wanted to eat ‘Rajma’ and she would smilingly oblige.

The affection that both Mrs. And Brig. Shard bestowed on me was unusual and early in those years, our friendship graduated to a level of close relationship and not a single day would pass when we would not meet or chat. He would share his plans, ideas and thoughts with me and I was touched beyond words when he first introduced me as his eldest son in a public forum. And his love and affection matched his words and to this day I enjoy the respect and the honour of being the eldest son of Brig. R. C. Shard.

It so happened that he moved to Binagudi as a Brigade commander when I had just taken up a challenging assignment in Assam and once in every few months I would drive 8 hours to spend a few days with them. The bond became stronger.

Very few people have the luxury of 2 sets of parents, Biological and Foster.
It was always a hard choice at every opportunity, whether to go to Chandigarh (my hometown) or to go to Brig. Shard’s home.

During the lower ebbs of life there was always a sound advice and emotional and physical support. Mrs. Shard encashed her bank bonds to finance my MBA and made up for the shortfall. Such are times that one can easily differentiate between friends for a reason, season or a lifetime.

While I was away in the UK, they would check on my mother’s welfare and would call mom to give her strength frequently. Till this day the degree of mutual trust and respect has ensured that no major decision or a function can happen without mutual consultation.

Wealth for most is a function of zeroes in their bank balances. For me wealth is quality of relationships in my life and support system that my near and dear ones provide all the time, unconditionally.