The Global rant about carbon emissions 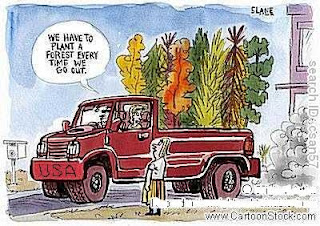 Top leaders of the world O, B, S and the likes amuse me. Their rant never stops about CO2 emissions and the impending urgency of doing something about it. And they want India and China to reduce the emissions to half.

The developed world (read G8) has enjoyed the pleasure of depleting the world of its fossils and fuels for the last 100 years and have failed to acknowledge their own contribution to the green house gases – all this while.

When suddenly they realised that they have brought the world to a precipice of destruction, they started blowing the trumpets of concern and are leaving no stone unturned to suffocate the developing world in the name of global urgency that might deprive the two most progressive nations of their share of development and growth.

The following statistic is a bit of an eye opener.

So is there a solution? Well practically ‘No’, which implies that the rant will continue forever.

Academically ‘Yes’ – The maximum amount of CO2 emissions happen because of heating, cooling and driving habits of a country’s population. Increase gas prices to a point that the emissions get reduced to the level that is targeted or to a level that will allegedly save the planet.

Isn’t this a simple economic principle of demand and supply (usage) curve.

Do these countries have a will – NO.
Can a structural and moral change be induced amongst the population of the developed world – NO

Developing countries have been a catalyst in retrieving the world from an abyss of severe depression recently. Let these countries develop and grow. Please do not snatch the right of these countries to their share of development.

And in the meanwhile the top environmental police party – Stop speaking and start acting.