India has finally matured and is shining 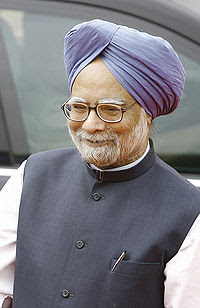 Irrespective of what the intellectual capital of a country is, the election results of the largest and most successful democracy of the world are a reflection of the ideology of the country’s population at large. I am ecstatic that finally religious fundamentalism and baseless contentions of regional parties (that had been a drag on the country’s progress since the last 5 years) have been resoundingly ignored by the populace.

The father of Indian reforms Dr Manmohan Singh who steadfastly stood by his principles and was ready to sacrifice the government rather than submit to the demands of the realpolitik is back – and with a resounding majority.

What does it really mean for anyone reading this blog, which has a rather international audience?

1. India grew at over 7.5% in the last 5 years despite a great political drag. With a clear mandate, Dr. Singh will usher India into the next phase of reforms and divestment of humongously giant public sector that will bridge the country’s fiscal deficit. A double digit growth in just a few years would not be surprising.

2. The conservative nature of Indian banking and the values of Indian borrowers saved the system and not a single bank collapsed. Albeit the banking sector grew at over 60% YOY when the financial system of the world was bleeding. With the lowest number of bank accounts per 1000 still, this sector will shine. And every foreign bank is likely to have a base in India.
3. Relationship with the US will improve even further. President Bush pushed for India’s entry into the nuclear club and this status will get a further impetus. America Was, Is and Will remain a superpower and the nucleus of world trade and economy. This axis of power might be an area to watch out for as the US is fed up of an artificially cheap Yuan that has caused unmanageable trade imbalances.
4. Stock markets will give thumbs up to this outcome as markets like stability. Watch out for sensex crossing previous highs before the end of this year.
5. The verdict is a clear indication that over 400 M people who were below the poverty line and uneducated are slowly getting educated and improving economically. The middle class will be a formidable force the size of which is likely to be double the population of the US.
6. Politicians are seldom economists and great economists stay away from politics. The diminutive 76 year old economist, Dr M, who was almost forcibly made the Prime Minister 5 years ago, is a stronger, mature, intelligent politician. And back with a Bang!
7. Young India (average age of population under 30) was always marred by old politicians who had wrested the power with themselves. The present government has a significant number of young highly educated politicians who have the eagerness to make a difference.

I would be happy to allow the Economists and the Capitalists of the world to draw their own conclusions..…….

For the rest, I would simply say “Watch out for India!”