Infosys Saga – Who is Omkar Goswami by the way!!

Mr. N R Narayana Murthy has been under some criticism for a while for having raised some questions that remain unanswered by the erstwhile CEO Vishal Sikka or the present Infosys Board, ‘Founders Go Away – leave the company alone’ has been a rhetoric that’s been echoing in the present board rooms of Infosys. 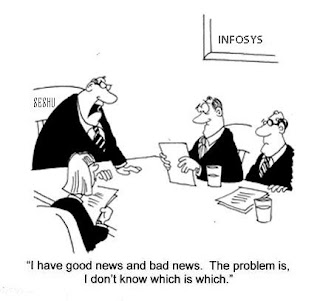 So when I read a scathing attack by Omkar Goswami in an open letter to Mr. Murthy – I wondered , By jove He must be one hell of a fellow to make such an advice and would have founded bigger better companies than Mr. Murthy. Well yes he has been on the board of many of them but I don’t think Omkar Goswami has to his credit an iota of what Mr. Murthy has achieved in his lifetime.
When I wrote about Sikka on 10th Jan 2017 in Huff post, I thought I had crossed a bit of a line in making some assumptions. But it’s a great feeling to be proved right, now and then, and that too in public domain.
Now back to Omkar Goswami
Google search threw up a Wikipediapage on Omkar Goswami and yes he is an economist by education, he might be a carrying a chip on his shoulder for being from Oxford, Masters in Economics, and of course a doctorate in philosophy by writing a dissertation on Jute economics which in today’s parlance is seemingly irrelevant on the face of it.
I dug deeper and the sum total of his life resume can be written as follows….
…A well educated economist, academician, and a columnist of repute with a doctorate on a defunct topic in today’s world.
Well I hadn’t ever heard of Omkar Goswami till 2 days ago but let me ask him a few questions since the season of open letters and editorials… (a’la Infosys) is in full spring.
Dear Omkar Goswami…….
Mr. Omkar Goswami – if the answer to any of the above was Yes – I would have heard of you for sure.
And if the same questions were to be put to Mr. Murthy, the answer to each one would be a resounding Yes.
It surprises me that people who have the skin in the game and have founded companies and nurtured these for a major part of their life and have earned and commanded (through their deeds, hard work and thought leadership) respect and adulation are being questioned by people who have no skin in the game. Most of the present board members of Infosys are retired professionals / executives who are now playing an extended innings (I am sure) for some remuneration.
If the companies are to survive beyond a global average of 33-35 years, decision makers and opinionists must have a skin in the game. Else it takes just a few quarters of bad decision-making to bring down companies and takes decades to build back the same.
Mr. Murthy-, the world (India and beyond) has looked upto your values and have endeavoured to imbibe within itself, what you have preached and practiced all your life.
So what if you asked a few pertinent questions or a few documents of a deal to be made public or raised a doubt on the remuneration of someone who has little evidence of achievement in Your opinion.
You founded Infosys, It’s is in your right to do so and I am sure millions along-with me stand with you in your ideology and in spirit.
Manu also writes on Huffpost

5 thoughts on “Infosys Saga – Who is Omkar Goswami by the way!!”