The rules of the global game have changed 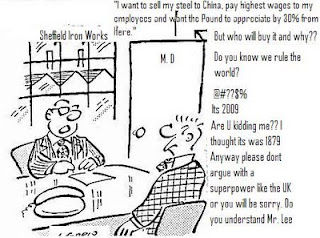 US, Japan, Germany and UK (top 4) contribute roughly 40% of the global GDP and have held this position for a relatively long period of time.

Settlement in a western country used to be a thing of pride at one point of time and in some pockets of the world – it still is. In the hinterland of Punjab in India many people would erect large concrete airplanes on their rooftops to indicate that someone from that house is either settled in Canada, US or the UK. Within the village community, that family would be looked at with respect.

Employment opportunities were galore. The great Western dream (derivative of the great American dream) was a reality and anyone who had the will could have his way.

The biggest catalyst that drives an economy is its infrastructure impetus. Roads, Dams, Bridges, Power plants, Industry. For a long time (many decades after the II world war) these sectors were in a constant state of development and progress.

Steel consumption in the US rose in the post-War boom years from 50 million tonnes in 1946 to peak at 110 million tonnes in 1975 and then started declining to reach around 90 million tonnes last year. More significantly, employment in the US steel industry has gone down from over 500,000 in 1974 to less than 150,000 now. The second fundamental structural change has to do with a decline in the cost competitiveness of western manufactured goods arising from a steady increase in the wage costs. This has caused a shift to low wage countries in the east, first of manufacturing and, later on, even of services. Ironically, the unionised labour in the west, which was responsible for the high wage spiral, has been the worst hit by job losses in the current slowdown.

More than often I wonder that if all the infrastructure that is required for a given country is in place, what will drive the economy of such countries with an aging population and torn social fabric. My assumption is that the infrastructure demand of the top 4 peaked out at the turn of this century. Smart people saw an opportunity and shifted focus to financial products that started driving the economic indicators. CDO’s came into being and the ‘top few’ managed to maintain that position for another decade before the bubble burst and the world almost reached a precipice of collapse.

And the rules of the global game changed!

The western world has made itself totally uncompetitive by its wage system, social system and artificially expensive currencies that have killed the local industry.

Protectionism in immigration policies and trade policies is providing a seemingly effective shield to the western world. It cannot last.