I was in the UK attending a tourism meet when I was raising a toast for Trump, not because I agree with his indiscretions etc but because I was right. I was right in believing in June just after Brexit that Trump would really prove all pollsters wrong. And he did. But what greatly enhanced the feel and the high of the bubbly on my tongue that evening was the announcement of demonetisation and scrapping of the 2 largest denomination notes in India. 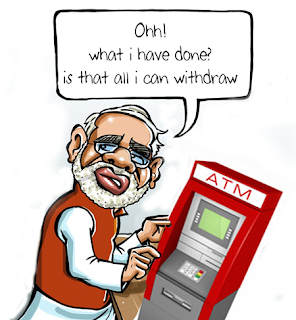 And that I thought required balls of steel and is the single biggest revolutionary step since the reforms of 1991.
And while the naysayers, most of them uneducated or politicians (read opposition), are crying hoarse over the move and marching around the parliament over-amplifying the plight of the people facing some difficulties, most cannot bear the shock of seeing their ill-gotten wealth become worthless in a fraction of a second. Mark my words no one of these protesters is worried about the poor farmer of an auto driver who is facing the difficulty. Most of these drama masters are suddenly cashless for there are assembly elections round the corner and election in India cannot be fought without cash in hand.
As a salaried employee since last 23 years, I haven’t really understood – what is black money. Never felt it, never touched it. But made me angry, very angry, to see people around me earning less, paying a fraction of income tax that i pay and having a better lifestyle than me, showing off cars that they don’t deserve to drive or haven’t earned with their hard work, working much lesser than me, less educated than me, and having seen no struggle in life. All thanks to a well-oiled machinery that generated a parallel economy – some say 50% of India’s GDP.
Paying cash for jewellery, land, holidays and cars had become a fashion statement and this breed with swathes and swathes of black money had blatant disregard of the nation or of the honest tax payer.
How would we expect the governments to develop infrastructure when infinitely large amounts of money for public welfare would get siphoned off because of the fertile environment that accepts and breeds black money.
It’s a sad state for any nation that among the ‘global lasts’ in ease of doing business
Why : because an honest entrepreneur just cannot wade his way through setting up an enterprise without the infinite hurdles of bureaucracy and archaic laws and unfriendly labour policies. At every step businesses have to earmark upto 15% of their capital to grease the system to facilitate licenses and permissions. By the way that’s if one doesn’t have to give a 20% equity to the politician in power.
It’s a sad state for any nation when a person walking on a footpath just drops down in a gutter and dies.
Why : because the local area engineer has taken a bribe or allowed the contractor to go scot-free without really completing the job.
It’s a sad state for any nation when banks lend to corporate entities without an adequate collateral cover and hundreds of billions of dollars of loans become delinquent.
Why : because of an inconvenient relationship between bankers, politicians and unscrupulous entrepreneurs.
The list and arguments are long but the gist is clear. The nation where 50% of its economy is a shadow and unreported, it will always create hyperinflation and assets and commodities will be unaffordable to a common man.
Modi has come so far, What he has done can cost him elections in 2019, the vote bank at the bottom of the pyramid is huge and today they are the ones who are in queues for hours trying to exchange a mere Rs 2000 (250 USD). Modi must hold his ground and take this mission to a meaningful closure thru a few simple steps such as.
Aristotle aptly said about 2300 yrs ago that “Man when perfected, is the best of animals, but when separated from law and justice, he is the worst of all”
Let the fear of law and judiciary percolate in the minds of every Indian citizen.
I wasn’t the biggest fan of PM Modi and believed that I had strong arguments in disagreeing with his rhetoric of his vision of India and his actions thereof. But today I believe that just that extra push, just that little reform, just that fear of God and justice can set India on a path to being a nation that it was 3 centuries ago when India’s GDP was 25 % of the world GDP.
Mr. Modi I am changing my opinion and I am falling in love with you, you are just a few steps away. Hold your courage of conviction in what you are doing.
Manu also writes in Huffington Post
Twitter @manurishiguptha

10 thoughts on “The day India’s fate changed for better”