Corona May be The Biggest Blessing in Disguise for Humanity 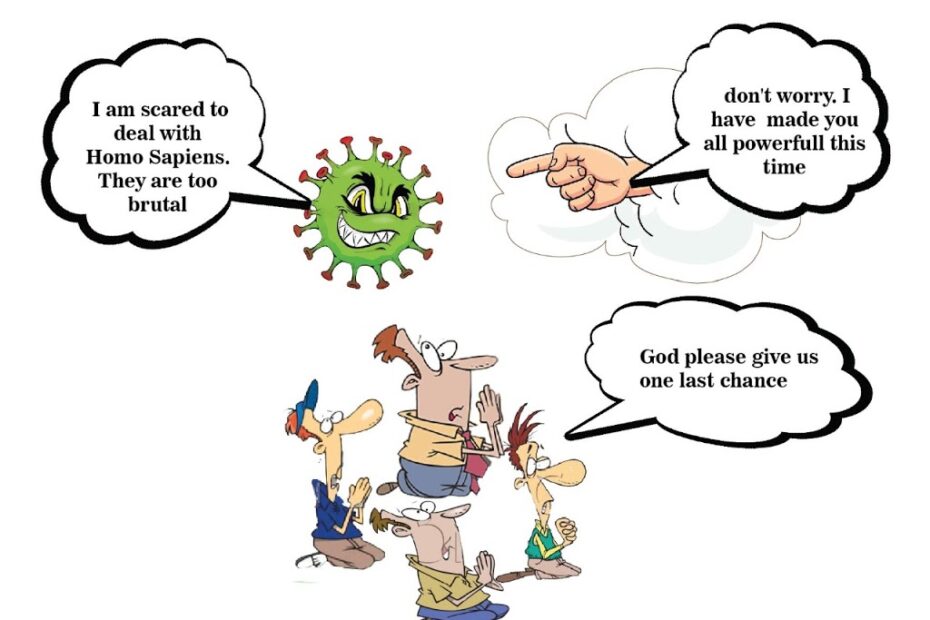 As Lenin famously quoted – There are decades where nothing happens and there are weeks where decades happen. The start of the year of Rat as per the Chinese Zodiac turned out to be uneventful and 2020 was supposed to bring prosperity, progress, fertility and be lucky for all other signs too. Early-Feb 2020, Corona had just about started to grip China and the rest of the world thought it to be more or less a china problem and a handful of senior global leaders (who pretty much write the destiny of the rest of the 7.5 Billion of us) were still talking about trade wars and trade imbalances, ideological differences on the basis of religion/military and finance leading to deadly conflicts and business houses/businessmen gloating on the stock prices of their companies being at lifetime high and designated as one or the other richest in their country/region/world,numerically  and then…..
…. Before anyone could say Jack Robinson, in less than 2 weeks this little virus (now popularly called the China-Virus by the POTUS, and so will I, till the Chinese stop eating anything that moves) created havoc by spreading like a wild fire across the globe thereby bringing down the alleged edifices of financial, intellectual, scientific, military and historical supremacy over each other in less than 10 days. The global supply chains that we have been so proud of in the name of industrial/trade revolution have come to a sudden stop. And we cant do shit about it.
So much for the conflicts, divisions and havoc that we created in the name of progress – that humanity stands naked at the precipice of a bottomless abyss.
Never ever since the advent of humanity and its recorded history has the world been so genuinely secular and united just to be able to survive and save itself from this cataclysm and everyone only worrying about the most primordial need of Food, Shelter, Clothing and Procreation. And everyone is wishing well for everyone else just to ensure self-preservation.
Ask Trudeau’s wife or Tom Hanks – both would give their Power / Oscar just to be able to recover fully. Ask the top 10 richest people on this planet – would they give everything away just to be able to save their most loved one from this Virus if needed??
Industrial revolution and relentless pursuit of profit (aka capitalism or need to establish supremacy on just the metric of wealth) has successfully destroyed what took a billion + years to get created. Take fossil fuels, natural reserves, rivers, glaciers – we have sorted everything out in less than 150 odd years and now we are wondering why and from where Mr. Corona struck humanity.
It’s the mother earth taking back its lost ground from us – homo sapiens – who started believing themselves to be the most superior race. Imagine a moment that all the money and the glory and the popularity isn’t able to buy You Your next meal because You have to forage for it just like the old times.
Humbling – Isnt it?
Videos and Fotos doing rounds on the internet show that just a few days of forced restraint on us wise homo sapiens has healed the planet of its pollution, air is cleaner (thereby removing carcinogens), rivers have fish again and animals aren’t afraid anymore and above all the endangered pangolins and bats in China are heaving a sigh of relief.
All that we need to remember is, that the shriek of a fellow cohabitant (animals, resources, poor/rich, fortunate/unfortunate) is all the same in the face of adversity. We humans have been too damn lucky for too damn long and have taken advantage of our respective situations.
Corona and many such challenges will come and go but let’s not lose the lesson that mother earth had to impose upon us so brutally. Ol’Kenny’s words, as he left us just 4 days ago, will continue to resonate always –  “But in his final words I found an ace that I could keep” – Let these profound words not go waste and learn the lessons that we must.
And I believe that this reset is an opportunity for mankind to find its soul lost in the morass of greed, corruption, one-upmanship and destruction of our beautiful planet in the garb of progress.
The choice is entirely ours!
@manurishiguptha