Case for appointing Google as the Central Banker

5 years after the worst economic meltdown (US housing et al) as i watch the indices erode shareholders wealth and the Indian currency plummet, i cannot help but muse over the underlying cause of economic crises in different parts of the world. 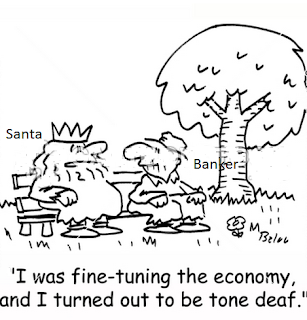 I have read of more than a handful of well known economists (Nouriel Roubini, Peter Schiff, Ron Paul, Raghuram Rajan etc etc) who claim to have predicted the housing bubble and almost all of them have something or someone to blame it on. These are people with considerable influence at a global scale. Yet nothing could be averted.
Housing bubble happened
US/Global deficits are at an all time high
Eurozone is terribly stressed. Greece Spain and Portugal are almost bankrupt
The Ver2. of Asian crisis is in the offing
Excessive liquidity flowed into Emerging Markets
Talks of stimulus-tapering have created a new crisis in Asia
My argument is that if so many Economists had the power and the intelligence to opine and take credit, why are we staring at such a dismal global scenario?
Human beings are driven by emotion of greed and fear (cognitive biases) and no one has the ability to take the most rational decision at the right time. (Thats God’s job really). So our central bankers all over the world have failed consistently. Since the time I developed a bit of understanding of economics, I have come across only 2-3 actions that central bankers take. Reduce/Increase interest rates by a few bps, Issue inconsequential – dovish or hawkish statements, give a dubious sense of calm to the citizens and opine liberally. Because that’s the easiest thing to do.
But has the world economics been sorted?
No! Actually its worse off than what it was 30 years ago.
But there is a counter opinion. Decisions taken by central bankers should be based on big data of cause and action and consequences. Only then can a global equilibrium be maintained. It is not humanly possible for the likes of Ben Bernanke, Mervyn King and Mario Draghi to analyse and act in absolute harmony that prevents future crisis and regulates overspending and irrational exuberance.
Between 2005-2008 maybe US interest rates should have risen far more.
Maybe Global salaries / benefits should have been drastically slashed to maintain export and industry competitiveness and reduced dependence on China that played havoc across the world with an artificially cheap Renminbi.
I believe that today no one can write algorithms and collect/analyse data better than Google. Why don’t we reduce our dependence on our central bankers and outsource this job to Google.
Google can analyse a 200 yr action history of central banks of over 150 economies on the planet and chart the action and consequence graph and effects thereof and create a perfect model for each and every nation and define the interest rates and all economic actions that have a bearing on our lives. Algorithms will take harsh decisions which humans fear to take. Algorithms will become perceptive and computers will develop intelligence to take rational decisions.
This is seemingly the only way out and we won’t get a chance to blame a banker or an economist because the world and nations would be in a state of equilibrium.
No one can deny that all of our economists and central bankers have failed miserably till date.

9 thoughts on “Case for appointing Google as the Central Banker”